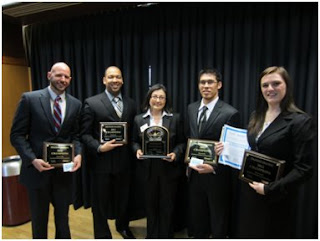 Kutztown, PA – April 24 - You’ve heard of The Apprentice television series. The Management of the Southeastern PA Walmart Region took that same concept and applied it to a collegiate competition in retailing. The competition involved area college students. The challenge was for the teams to create a plan that focused on sales, profits, and overall, customer experience, and was judged based on the written plan, a store visit, and the presentation of the plan. Students prepared the project during the fall and/or spring semesters and presented their plans at the competition held at Kutztown University on April 18. The competition was co-sponsored by The Center for Retail Solutions (CRS), a non-profit organization whose mission is to bring together retail academicians, students, and practitioners.

“The next generation of business leaders and retail leaders… are in this room,” exclaimed James R. (Doc) Ogden, President of CRS, noting the talent and determination of the participants. The judges of the competition were Tim Smyer, Walmart Market Manager, Jack Gottlieb, President and CEO of Total Solutions Group, Ashish Patel, Walmart Market HR Manager. According to Smyer, “We think presenting students with real business problems and having them develop solutions to those problems will help them bridge the gap between academics and the business world.”

Each winning team received a plaque. The grand prize winner was the Nittany Group from Penn State Lehigh Valley, who received a ‘traveling’ trophy to be housed at their campus until next year’s challenge. These winners also received a $250 Wal-Mart gift card and a personalized coaching and training session for the team from The Total Solutions, Group, Inc.

While the judges deliberated, Walmart representatives spoke to students about their presentations and about opportunities at Walmart. Presenters for this session were Gerrit Bandison, Walmart Regional HR Director, Steve Lauthers, and Britt Roberts-Faulk, both store managers.

Upon conclusion of the awards ceremony, it was announced that the Collegiate Challenge will run every year with a different sponsor.

###
at 10:15 AM
Email ThisBlogThis!Share to TwitterShare to FacebookShare to Pinterest