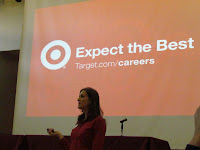 They came ready and willing to tilt at windmills and tilt they did as five teams from area universities competed in the 2013 Center for Retailing Solutions (CRS) “Target Challenge”. On Tuesday, April 2, 2013, teams of student warriors from Penn State – Lehigh Valley, Penn State – Berks and Kutztown University battled for the CRS Challenge Traveling Trophy and $1,000 cash for first place. The competition was held in the Multipurpose room of the McFarland Student Union on the Kutztown University of Pennsylvania campus. 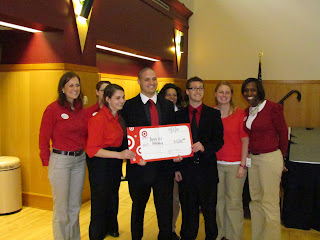 Kutztown proved too much for the other contenders as the team Direct Hit Marketing Solutions took home the trophy. Members of the team, Lillian Daly, Chris Rossi and Shane Puhlman under the guidance of Dr. James R. (Doc) Ogden generated an award-winning plan to help reduce retail shrinkage for the Target Corporation. Amy Lauricella, a senior field campus recruiter for Target, in conjunction with CRS Board Members Dr. Denise T. Ogden (Penn State – Lehigh Valley) and Jennifer Seagraves (a Target Representative on the CRS Board) developed an in-depth case study in regard to store shrinkage. The universities were provided the case study and the students developed wonderful plans that addressed this critical issue. Ms. Lauricella commented “…the cases the students created were amazing and in-line with some of the initiatives Target Corporation has undertaken to address the issue”. 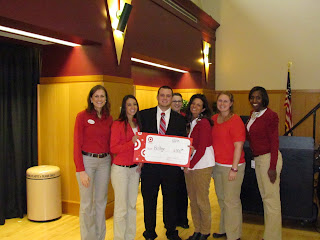 One of the winning team members was asked why he got involved in the competition. His reply, “Doc Ogden asked me, and when Doc asks, you answer”. The second place award of $500.00 went to the Kutztown University team “Bullseye” made up of two students; Alyssa Graham and George Markert. The Penn State – Lehigh Valley teams TEAM PSULV and K.E.T. Consulting were made up of Steven Salloum, Tim Padilla, Corey Graffin and Colin Coleman (TEAM PSULV) and Ken Jancowicz, Elias Rabeh, and Tiffany Miller (K.E.T. Consulting). Penn State – Berks brought students Allison Wennell, Jace Mickley and Tia Miller (The Bulls Eye Experience). Penn State- Berks was guided by faculty members Professors Ada Leung and Jim SHankweiler; Penn State – Lehigh Valley was coached by Dr. Denise T. Ogden and the two KU teams were under the guidance of Dr. J.R. (Doc) Ogden.

We’re thrilled to have such great companies sponsoring the event. We’re always looking for new sponsors as well. For information about the Center and the competition, please visit the website www.centerforretailingsolutions.org

The Target Collegiate Challenge is designed to solve a problem for Target Stores that deals with reducing shortages in electronics and entertainment. The top team will get $1,000 and a ‘traveling’ trophy that will be housed at the winner’s school. The second team will be awarded $125/person. Everyone participating will get a certificate.

The competition will span Fall 2012 and Spring 2013. Teams are eligible to submit their entries in the Fall or Spring. Deadline for the paper submission is March 15. The competition will take place April 2, 2013 at Kutztown University, Kutztown, PA. Each school or branch may submit up to 3 teams. Last year some of the colleges ran a local competition and then sent their top teams to the final competition. This is a great class or club (e.g. SIFE, Business Clubs) project! The competition will be judged on the written plan, and the presentation of the paper.

The details of the Challenge are available through this link. We think presenting students with real business problems and having them develop solutions to those problems will help them bridge the gap between academics and the business world.
at 9:37 AM
Email ThisBlogThis!Share to TwitterShare to FacebookShare to Pinterest